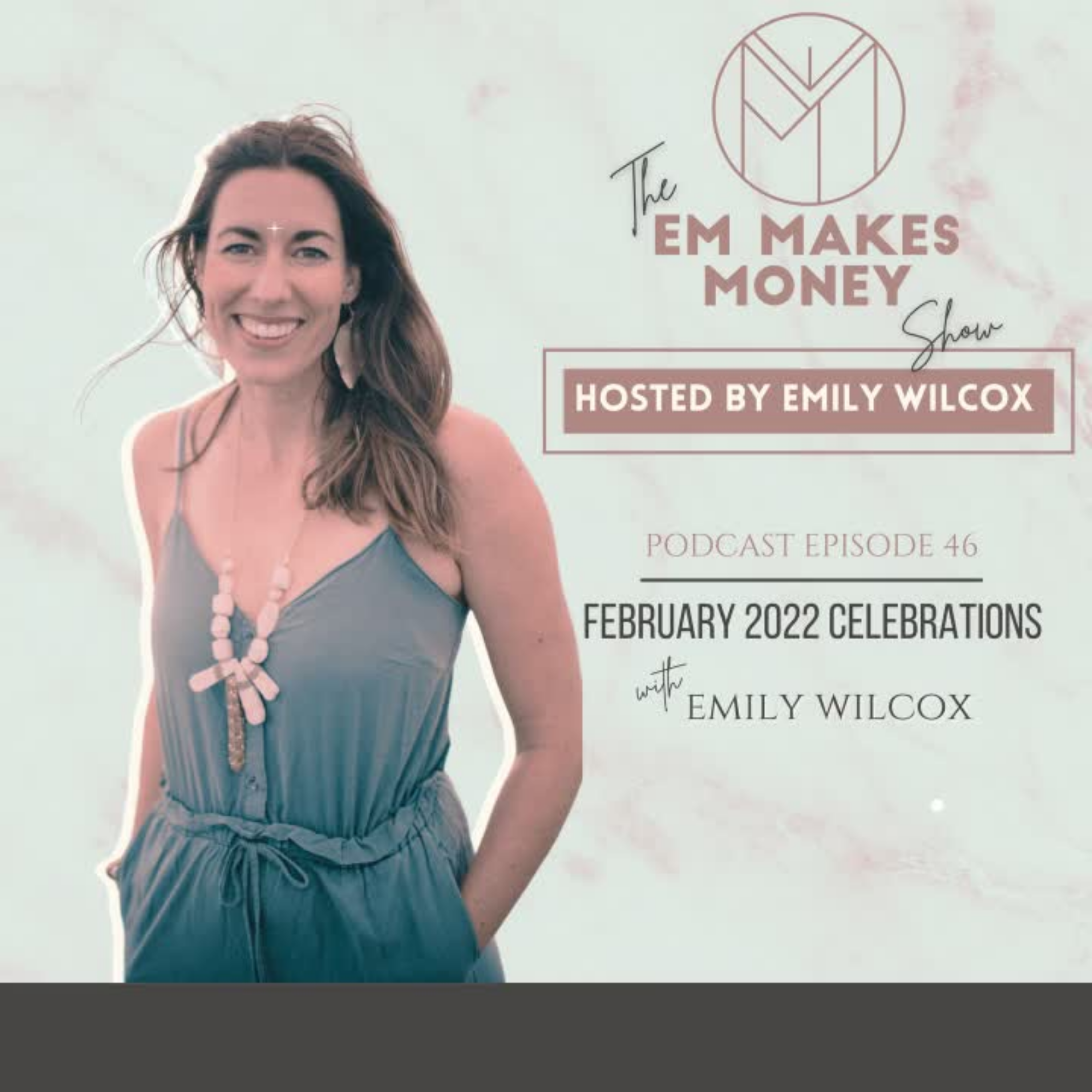 Emily looks back at February 2022 and completely celebrates what the love month has brought to her.

Send a DM to inquire about open coaching & masterminds or go to https://www.emilywilcox.com/products

Hello, and welcome to another episode of the M makes money show. I'm laughing at myself because I am sitting here on March 31 about to record an episode of February celebrations. As you can tell this got a little behind me. However, it really is my intention to be showing up on here sharing numbers and nonfinancial celebrations every month. And sometimes when I'm subconsciously avoiding something. It's like a self-sabotage sort of thing. Like maybe I'm not super proud of the numbers, or I'd rather just not share. And I don't know for sure if that's what happened in February. But either way, it's part of my commitment to myself and making sure that if this is just part of my pattern, then I'm going to show up regardless, right, February, it was actually a really, really beautiful month. So I'll start with the financials we collected $87,832 in cash, and that came from a variety of sources. 9800 So 9008 33 from the E-commerce business 72,000 Zero 46 from the agency and 5953 from coaching. February is such a special month because obviously it's got the vibration of love with Valentine's Day. And Jeff and I's wedding anniversary is February 13. So it's always extra special for us because we're celebrating our anniversary and celebrating Valentine's Day. And I feel like this year in particularly we really leaned into being in the love vibes all month, were celebrated 12 years of marriage, which feels really fun and monumental. And Jeff had this idea where we like walk cards for each of the kids. And in the cards. We invited them to be our date for a little Valentine's Day dinner. And so Jeff took fey to a fancy Italian restaurant. And I took JJ to also a fancy Italian restaurant called Charles Edward cheese. Just kidding. Chucky Cheese, not fancy at all. But whatever he's for, he was three at the time. And that's what he loves. And he's not going to enjoy a fancy restaurant and I'm not going to enjoy having him at a fancy restaurant. So we just went to a place that was fun for him. And actually the pizzas pretty delicious. They're so just like making new family memories. I definitely just felt such a fun vibe in February of like, everything's working out. Independent of the numbers, even of like the facts of my current reality. I just felt so connected in with my vision and trusting that everything is building momentum towards the dream life that I'm envisioning into. So what else in February I delivered really incredible experiences inside of the millionaire's Lounge, which was a collaboration that I did with Cassie Howard and Selena grey. Oh my gosh, that space was just really so beautiful and so potent. I also did a mini mind a two-day mini mind on two to two so February 22 And then February 23rd. And that was so potent so many breakthroughs and aha moments for the clients in there and I love doing those little experiences where it's only a few $100 and you get to experience coaching. You get to experience one on one, you get to experience a mastermind you get to experience how one potent question one potent answer can change everything. I also celebrated New women joining money wound medicine. Oh man.

I love this program so much is self-study which is just really fun because people can join at any point and get instant access and invariably, they'll end up sliding into my DMs just talking about how much is shifting for them. That program is pure magic. So every time I get an email with a receipt that someone purchased, I do a huge celebration, honestly, like I actually put on music and like make it a whole thing. I enjoyed so much spaciousness in my schedule in February. So so so grateful for now at the end of March or March felt much more full. So super grateful that I got to have the spaciousness that I had in February. I also did a lot of Yoni healing in February. So for women, this can be really important that we have this opportunity to reclaim our womb space and our relationship with our Yoni and clear out any old energies that are there any conditioned feelings about our Yoni, the way that she looks the way that she smells like anything. There's so much out there that society has conditioned women to believe that we are less than or that there's something about our bodies broken or less than ideal. And it felt so good to just reclaim my own personal truth. I also allowed myself to cocoon for a few days in February, when that was the energy that I was feeling. This is a big one for me because I am a doer, I really like to be in aligned action. I like the energy of kind of moving and shaking and feeling like there's momentum in that phase. And yet, it's like there can't be spring without winter. And when I go through winter, energetically, I don't like it, it feels like I'm depressed or there's something wrong with me. So I'm proud of myself for just honoring a few days of cocooning, not making it mean anything about me, really trusting and knowing that I always have enough energy and a month to do everything that I want to do. But in a given day, that might not be true. And just really trusting the divine cyclicality of being inside of a female body. I also experienced much higher profit in February across the businesses. So that felt super fun. We're not paying for any ads in our E-commerce business, or in our agency, for that matter. The coaching business is so profitable, and it just felt really good. That's been one of my intentions, I paid off the hyper mind now known as unity, the mastermind that I'm in with Melanie. So that was such a significant moment. Because when Jeff and I kind of said yes to that investment, $120,000, it just felt so big and scary. And so to pay it off early, and to choose to be in such celebration of that investment of the woman that I've become through being inside of that container, it was so special, and we actually had dinner reservations at a really nice place, and a friend joined us and we cheers to it. So I have a beautiful memory to go along with the celebration of paying off that incredible investment. We also added $27,000 into our infinite banking systems. So that felt exciting. And once a year when I get that bill, it used to feel like a gut punch. And it would feel pretty scary and it would feel like lack and it would feel like that money was going away even though that money was just being put into a different system that I could still access. So I now really appreciate when that bill comes because it helps me to see how far I've come and grown in my money mindset. And it actually just felt exciting. The other thing and this is the last thing that I want to celebrate from February is that I was featured in GaAs magazine alongside so many women that I deeply admire. My coach Melanie and Leia was the feature so she was on the cover of the magazine and I was on the inside actually I have it here on my desk. So for those of you who are watching this on YouTube, you can see it, this is the magazine and I'll flip to my page. What was so cool is that it's my first time getting PR featured as a coach. So I've had PR my products I've had PR before in People Magazine and Buzzfeed and celebrity babies wearing our products and I've also had PR features as the CEO of an agency but to be featured. There it is she's so beautiful. Look at that, to be featured as a coach in a magazine and like such a gorgeous magazine, who has felt like anchoring in this identity at new levels. And honestly, I feel like the truth of that is still landing for me.

So I'm actually grateful that we're talking about it right now. So I get this new opportunity to really let it land and to feel it in the depth of my being, that I belong in that magazine. And I belong with those incredible women and that I get to celebrate it, and I get to shout it from the rooftops. So thank you so much for listening in, as you've listened, if there are things that you want to celebrate, now, I understand by the time you're listening to this, February is going to feel like it was very much in the rear view. However, what I know to be true is that one of the most incredible and powerful practices we can have is to look back. So if you're listening to this, and it's April, or may think back to February, what were you celebrating what was good, what was a challenge, then, and you're gonna go holy cow, I'm only two or three months out from that. And already, everything feels so different to me, or maybe I was celebrating my first 10k month in February. And now it's May, and I'm celebrating my first 20k month, oh, my gosh, I've doubled my business in 60 days. What I know to be true is that in the moment, it's rare for us to just feel completely celebratory and completely excited about where we're at in our lives, there are often some really good things that are happening. But we also attach expectation to it. And sometimes it feels like things aren't happening fast enough, or by the time they happen, we're already dreaming into the next thing. And so it diminishes a little bit of the accomplishment. It's not until we look back and give a little more context. And given the Wisdom of hindsight, that we can see how fast everything actually is moving and shifting in our lives. It's really quite incredible. But we don't often stop to take a look at that. And it does us a disservice. Because when you think about law of attraction, if you're feeling the lack of time, the lack of results, if you feel like things are moving slow, that's your point of attraction. So your magnetism, the types of experiences that you're attracting to you have to be a match for lack of time, lack of results and things moving slow. I don't know about you, but I do not want to attract things from that point of attraction. So when we look back and say, wow, I've come so far, wow, things are happening fast. Wow, my life is really transforming. Oh my gosh, I can't even imagine where I'm going to be in two months. This is so exciting. If this keeps up, gosh, I might have X, Y or Z you feel how different that is. That's the point of attraction that we want. Because now all of a sudden, we're an energetic match for things not making sense things going so fast things surprising us things being beyond our wildest dreams. So that's the practice that I'm going to invite you into. And I would love for you to share and tag me so that I can celebrate you as well. Thank you so much for listening, and I'll talk to you soon. Bye.

There are no comments yet. Be the first one to leave a comment!